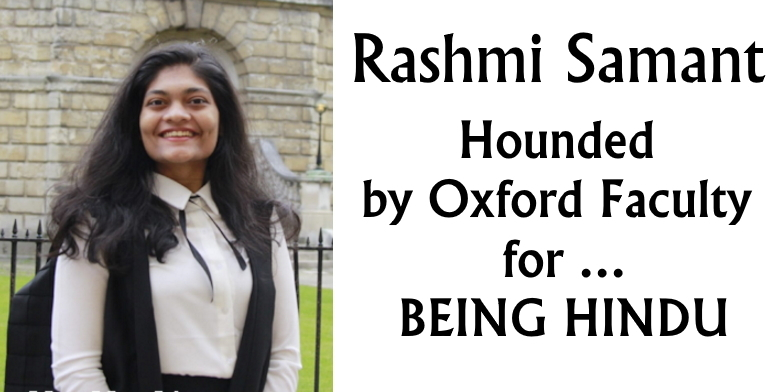 Oxford University is again under the global microscope for its inability to provide a safe and harrassment free environment for students of Hindu origin, as a faculty member again targets a Hindu student, unleashing an unprecedented tsunami of cyber bullying.

“The fact that I am a Hindu no way makes me intolerant or unfit to be the President of the Oxford SU.”

Rashmi Samant, an engineering student pursuing a Masters in Energy Systems, became the target of bullying of the worst kind when she became the first Indian Hindu woman to be elected to the position of President of the Oxford University Students Union. The lynch mob was led and incited by a faculty member Dr Abhijit Sarkar, of the Faculty of History. Here's a sample of how she was attacked -

“What hurts me the most is that my parents were dragged in the most insensitive manner: their religious sentiments and regional background were insulted in the public domain..”

So what was the crime which warranted Oxford's faculty and students to harass, bully and incite hatred of a 22year old overseas Hindu student, a women of colour, openly challenging supremacisst of all kinds? Take a look for yourself..

Are these images posted by a 17 year old from overseas so offensive to a "reasonable person", that they justify Dr Sarkar fuelling such a cyber lynching?

In 2016 The British Government published a paper on Hate speech and hate crimes stating:-

Hate crime has a particularly harmful effect on its victims, as it seeks to attack an intrinsic part of who they are or who they are perceived to be: their race, religion, sexual orientation, disability or transgender identity.

Hate crime of any kind, directed against any community, race or religion has absolutely no place in our society…. Rt Hon Amber Judd, Home Secretary

Hate crimes are pernicious; they send the message that some people deserve to be targeted solely because of who they are or who they are believed to be. Such crimes have a deep impact on victims because they are targeted against some intrinsic part of their identity (their race, religion, sexual orientation, disability or transgender identity). Those who commit hate crimes also attack the fundamental values that underpin our diverse society, values of acceptance and respect for others. Through the spread of fear, abuse and violence, hate crime can limit people’s opportunities, stopping them from enjoying the full benefits of our society and can lead to isolation and segregation.

Any crime that is motivated by hostility on the grounds of race, religion, sexual orientation, disability or transgender identity can be classed as a hate crime.

There are three categories of hate crime in legislation:

We will only be able to drive down hate crime by tackling the prejudice and intolerance that fuel it. Unless we work to challenge bigotry and to educate young people, hate crime will continue.

At this moment Oxford University has not suspended Abhijit Sarkar, has not made any announceoment of any action it may or may not be taking despite thet fact that this issue has resonated with Hindu students across the world, from Udupi to Rutgers.

Dr Sarkar's Bullying & Harrassment of Rashmi Samant to the extent that she had to leave the country, is a crime. Because its clearly motivated by his hatred of Hindu's, its a hate crime and he must be arrested.

The role of the Oxford Uni Students Union is also being scrutinised, as an organisation established to safeguard the welfare of students, its role in pressing Rashmi Samant to resign will in due course be scrutinised by lawyers. Did it act to protect her from the hate campaign being fuelled by the likes of Dr Sarkar, a faculty member?  Or did it "toss her to the wolves" in a stunning display of negligence?

If you feel that Hindu students are not adequately safeguarded and would like to communicate your concerns to the Police and the authorities at Oxford, please click the "take Action" button below.

How Abhijit Sarkar Targeted Rashmi Samant! Genocides are preceded by dehumanization of a particular group. Imaginary, innuendo-laden, characteristics are attributed to that group using hate-speech. Sarkar and his Colonials are doing just that