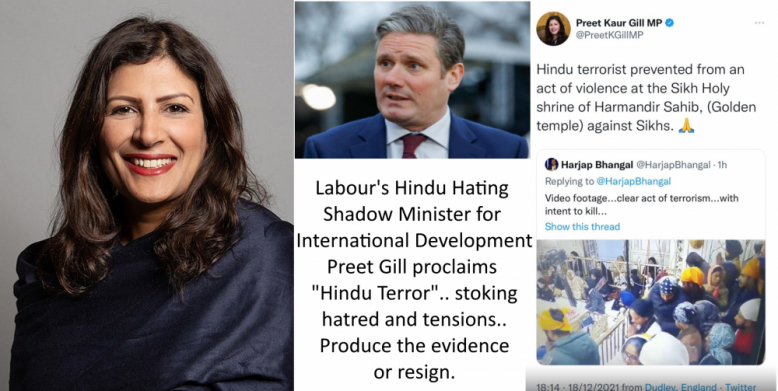 Labours remarkable ability to take in diverse people of all colours and backgrounds and transform them into rabid anti India Anti Hindu hate speakers was again on display this week when Preet Gill MP revealed the scale of her hatred in a tweeted message.

News of the tragic killing at the Golden Temple had just been announced and the shock stunned Indians everywhere. At that time, the identity and motivation of the clearly mentally unstable person who seized a ceremonial sword in the sanctum sanctorum, had not been established nor disclosed by Indian authorities. This person who had been disarmed and restrained, was then violently beaten and killed by the gathered mob, within the Sikh Temple confines, whilst Police were close by. The event is tragic on so many levels, the gravest being the loss of life and the disregard for the law not to mention the hatred which drove the mob to commit murder, but the tweet issued by the Shadow Minister inflamed the situation and brought friction and tension to the cities and streets of the United Kingdom. Why?

It appears that there are only two possibilities. Either she was in possession of national security level information not in the public domain or in fact she responded out of hatred for Hindus, seeking to incite friction and conflict between the Hindu and Sikh communities, both here and abroad.

It is imperative that Keir Starmer's Shadow Minister for International Development publishes and provides the evidence she relied upon in making that otherwise incendiary and potentially hate-speech infused tweet.

If you feel that the Labour Leader Sir Keir Starmer needs to act to provide clarification and would like to communicate your concerns to his office, please click the "take Action" button below.